Testing the efficacy of a new drug candidate in mouse models is a crucial step towards the clinical phase of drug development. The jump of complexity from cellular models to animal testing is huge even when using more complex cellular 3D models to prepare for the in vivo phase.

Before testing the drug’s efficacy in mice, our team will have performed several studies in regards to ADME, the maximum-tolerated dose, and pre-formulation experiments.

Reaction Biology’s animal facility is located in Germany and certified according to ISO 9001. We provide tumor models for efficacy testing in xenograft and immuno-oncology models.

Medium-throughput screening via the In Vivo Hollow Fiber Model

The integration of the Hollow Fiber Model in the compound screening workflow allows the selection of:

a.  the most efficacious compound
b.  the most susceptible tumor model 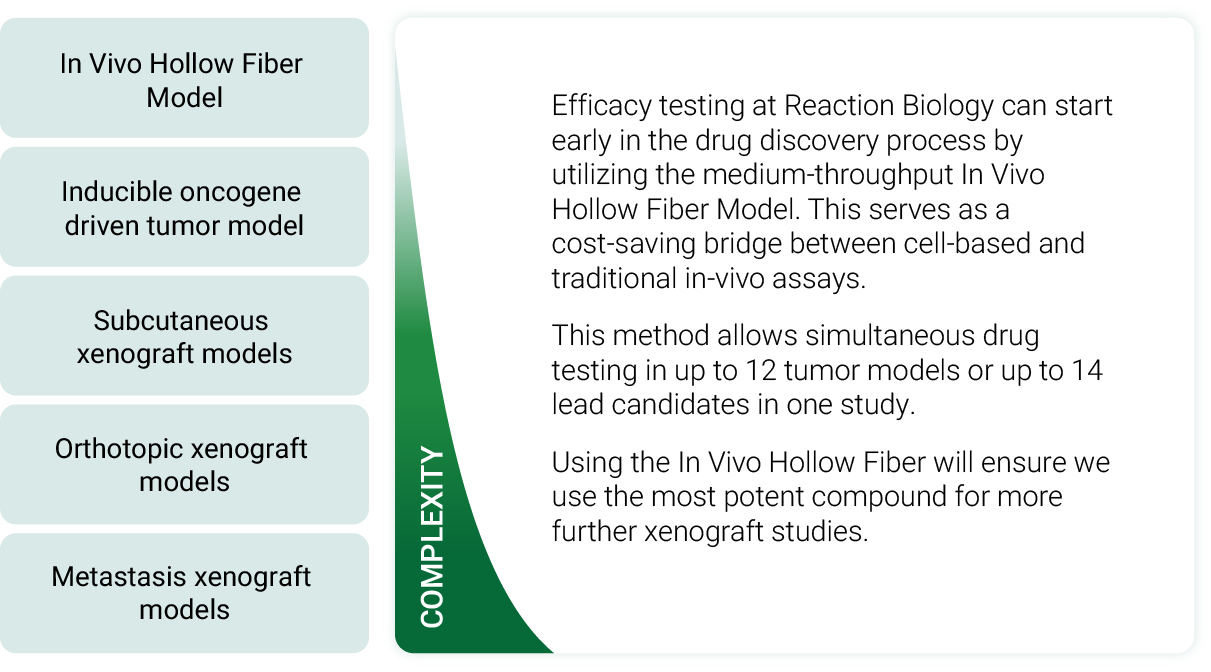 Genetically engineered models tailored to examine your target in vivo

Reaction Biology can test the efficacy of drugs in genetically engineered models. To this end, fibroblasts are stably transfected with a proliferation-driving oncogene (the target) which than can be inhibited in the mouse. The testing is performed in fully immunocompetent mice. Such models serve as excellent readouts of a single driver of tumor growth, such as a constitutively active kinase.

Immunotherapy often results in best responses when combined either with immune-checkpoint inhibitors and/or with conventional therapeutics.
Therefore, testing the immune-modulatory effects after therapy may yield the wanted results, even when a reduction in tumor size cannot be accomplished.

Our team of scientists has many years of experience in the immuno-oncology space and will guide your project towards meaningful testing of your new immunotherapeutics. See below our immunotherapy testing workflow. 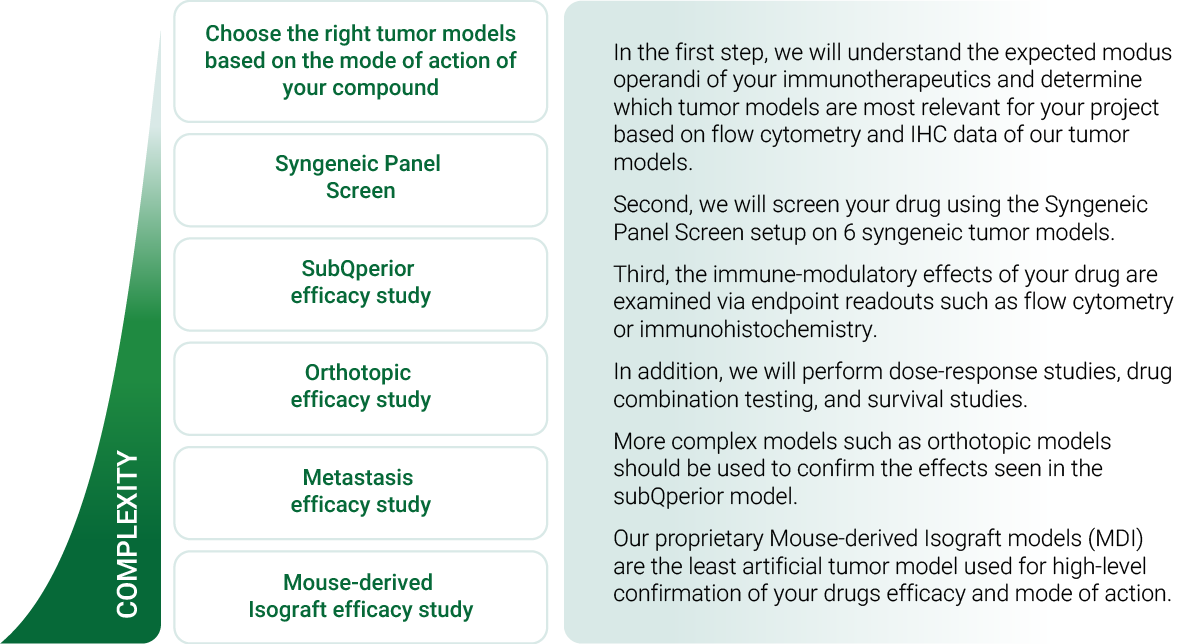 SubQperior – the next generation of syngeneic tumor models 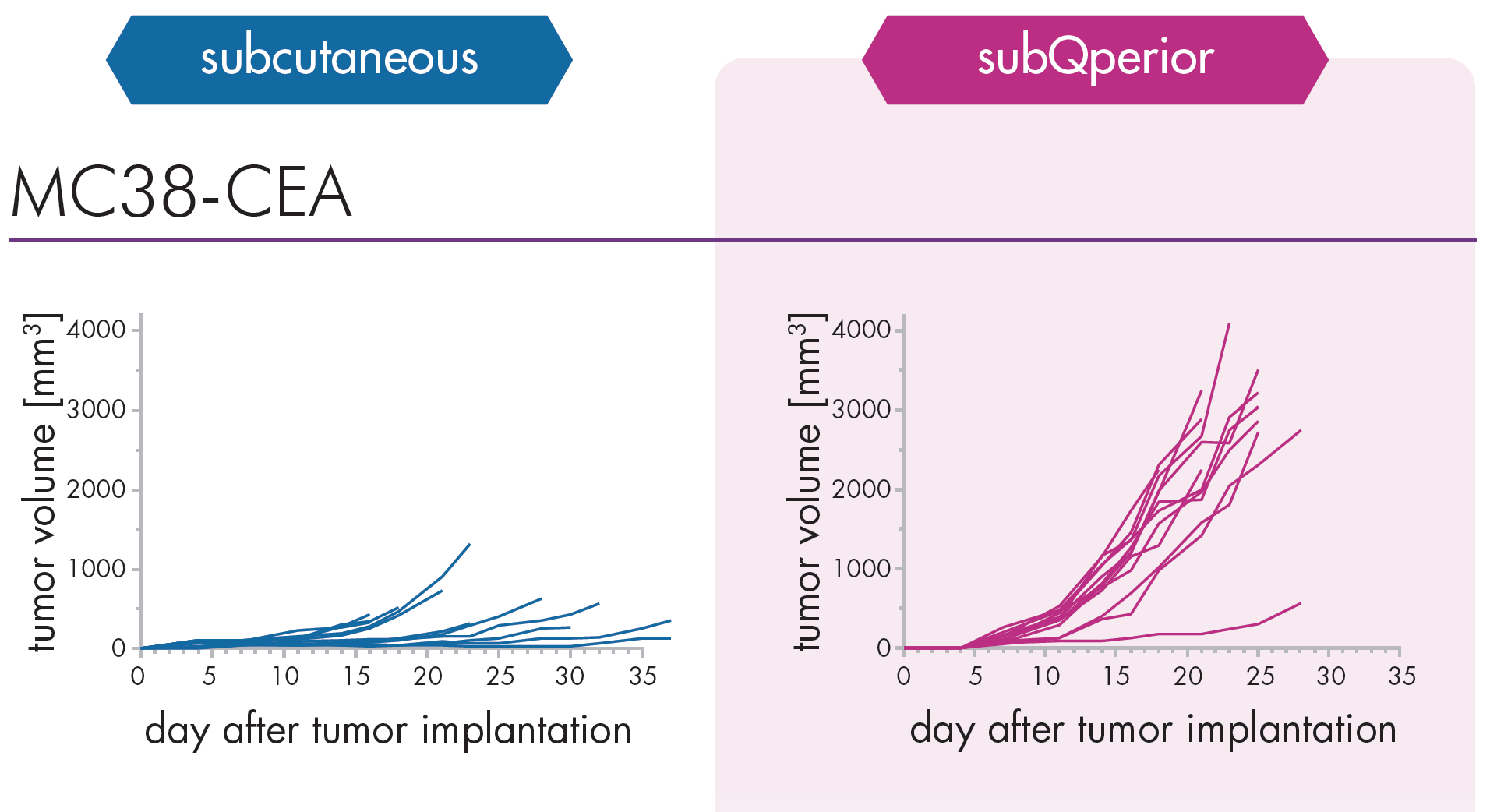 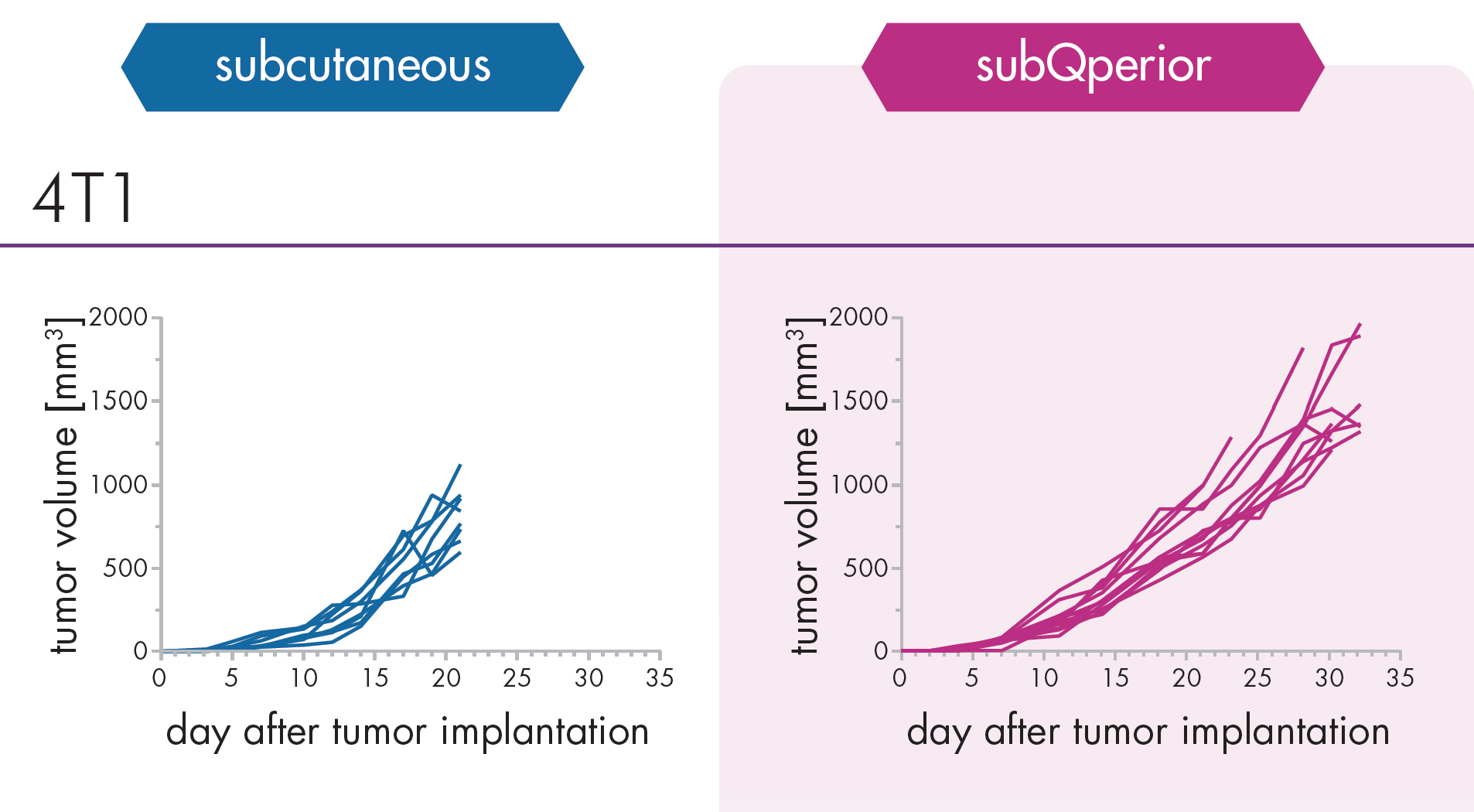 To overcome some of the most common shortfalls of subcutaneous models we have explored options of alternative implantation methods. We found that implantation of tumor cells from any origin into the mammary fat pad of mice resulted in virtually no ulceration and exceptional homogeneous tumor growth for efficacy studies with sound statistical outcome.

All of our syngeneic models were established as subQperior models. Experiments with immune-checkpoint inhibitors showed comparable outcomes with subcutaneous models.

Drug testing in mice is never the same as in the patient; however, we try to make it as translational as possible. To create our spontaneously developed tumor models, we used non-transgenic, fully immunocompetent mice and let them age in our facility. Several mice got cancer, of which we could isolate and establish two tumor models via propagation in mice only.

The models were characterized in regard to their histology, tumor origin, immune infiltrate, and response to immune-checkpoint inhibitors. Below is the histologic characterization of one tumor model, the spontaneous MDI JA-0009.

The enlarged axillary lymph node is the origin of the tumor model, which was identified as solid invasive adenocarcinoma. The cancer is of epithelial origin, possibly exocrine such as mammary gland, pancreas, salivary, etc. There are areas of neoplasia suggesting epithelium to mesenchymal transition. The comparison of the primary isolate and retransplanted tumors show that the tumor tissue architecture was conserved. 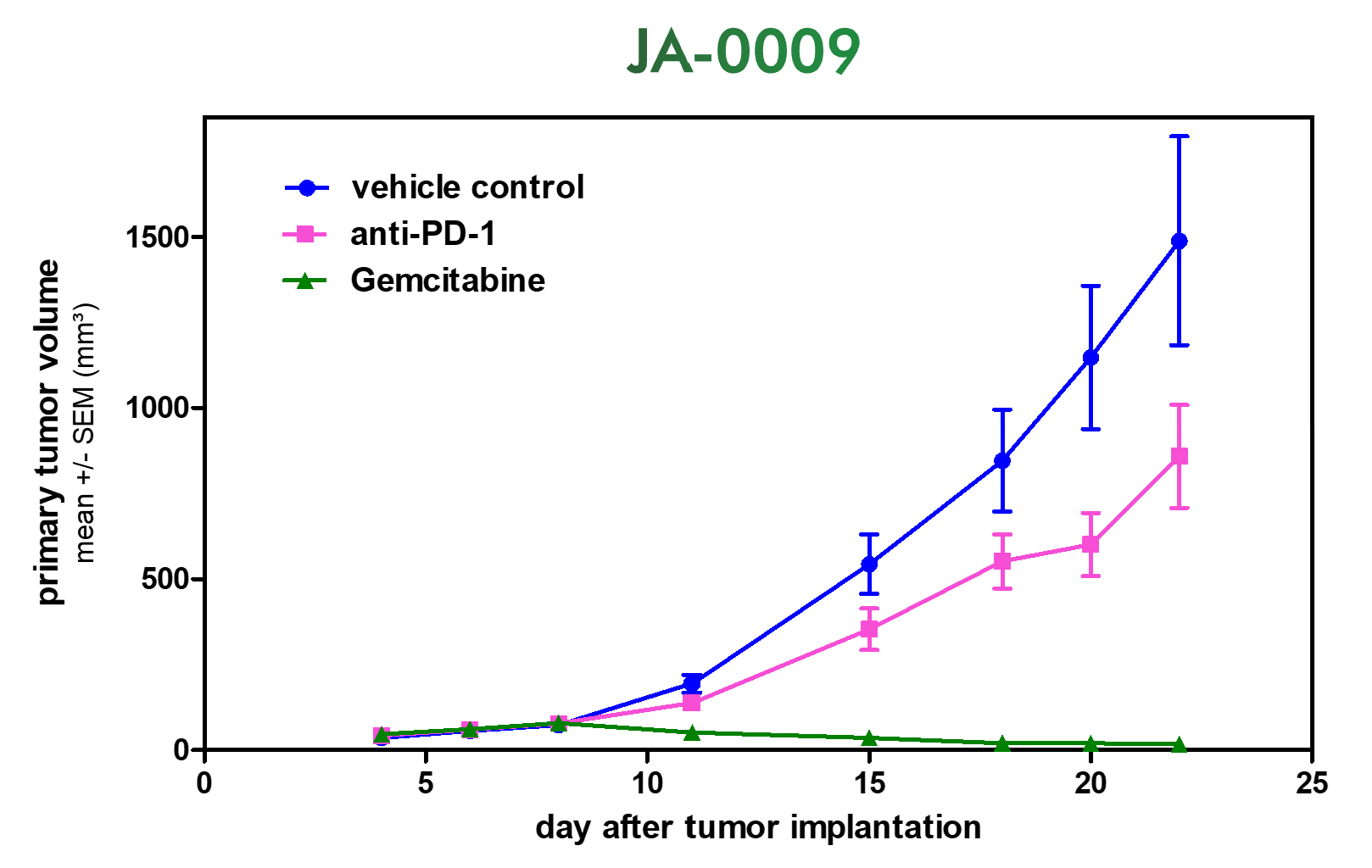 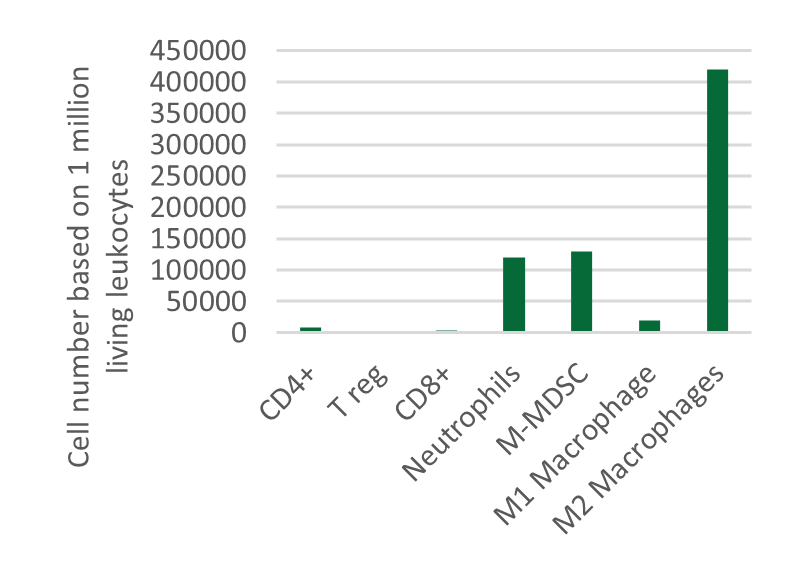 JA-0009 tumor pieces were implanted subcutaneously into mice treated with anti-PD1, anti-CTLA4, or both on days 7, 11, and 15. Tumor volume was monitored via caliper.  At the endpoint, we investigated the immune infiltrate of the vehicle group. M2 macrophages were the most abundant cell population.