Single cells are seeded in soft agar medium for growth independent of the attachment to a surface. Tumor cells, as opposed to other non-transformed cell types, can divide in an anchorage-independent way with single cells building cell colonies over a course of several days or a few weeks. 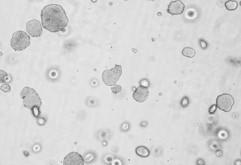 Wells of a 96-well plate were coated with 0.6% soft agar (A), followed by seeding of the cells in 0.4% soft agar (B). After the agar has solidified, compounds are added (B) and cells are incubated several days until colonies have formed (C). A cell viability reagent is added, and fluorescence is measured as an indirect quantification of colony growth in soft agar using Resazurin (D).

The Aurora B inhibitor VX-680 was tested for inhibition of the soft agar growth of A549 non-small cell lung cancer cells at indicated concentrations. Cells were left to form colonies for 5 days, photographed, and stained with a fluorescent cell viability agent. Fluorescence was quantified and, for analysis of IC50 values, was expressed as a percentage of colony growth in the presence of solvent alone.

Controls: DMSO only is high control. Staurosporine treatment (at 1x10-5M) is low control. In every project, we include the IC50 value determination of a reference compound.

Cell lines: Please inquire to receive a list of cell lines that are established with the Soft Agar Assay format. The establishment of assays with custom cell lines is an option.

Report: A detailed report including assay conditions, methodology, and comprehensive evaluation of data as well as raw data for each analysis will be provided. Photographs of colonies can be provided upon request.

Turnaround time for standard studies is around 3 to 5 weeks. Expedited scheduling and data delivery can be arranged prior to study commencement.

Screening facility: The assay is performed in Freiburg, Germany. 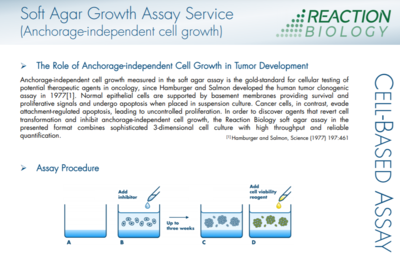