In vivo metastasis models are designed to analyze the anti-metastatic effect of novel anti-cancer drug candidates.

Reaction Biology has a team of global business development managers free to discuss in most time zones. Contact us today for inquiries about our xenograft and syngeneic metastasis models or to directly request a quote.

Reaction Biology's in vivo metastasis models allow the differential examination of metastasis location. A. Orthotopic breast tumor cells migrate to the lungs. B. Tumor cells disseminate into different parts of the body such as bone marrow or lungs after intravenous injection. C. Tumor cells injected intracardially on the other hand settle in the brain. 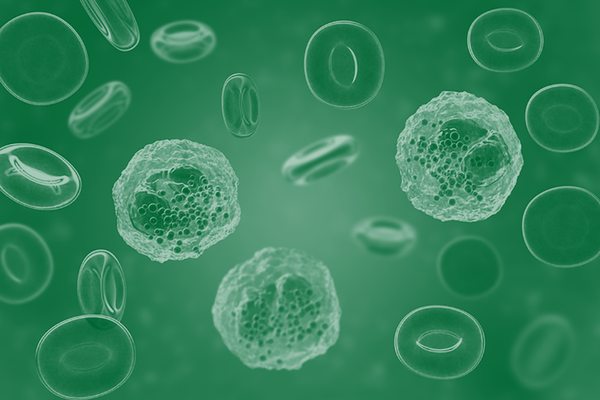 Goal: A standard of care drug was tested for its potential to inhibit metastasis from orthotopically growing breast tumors 4T1.

Study layout: 4T1-Luc-M3 cells were implanted into the mammary fat pad of Balb/C mice, at 12 mice per group. After randomization on day 4, treatment was initiated. The test compound was administered intravenously at 12 mg/kg on days 4, 9, and 16 after implantation. Primary tumor growth was monitored via caliper twice weekly, animal weight was measured three times per week, animal behavior was observed daily. On day 21, animals were euthanized and endpoint measurements for the determination of primary tumor volumes, and wet weights were performed with primary breast tumors. Selected organs (lymph nodes (a mixture of inguinal/axillary and brachial), ileum, spleen, kidney, spine, femur, liver, heart, lung, and brain) were collected, homogenized, and subjected to enzymatic luciferase quantification to determine metastasis burdon. 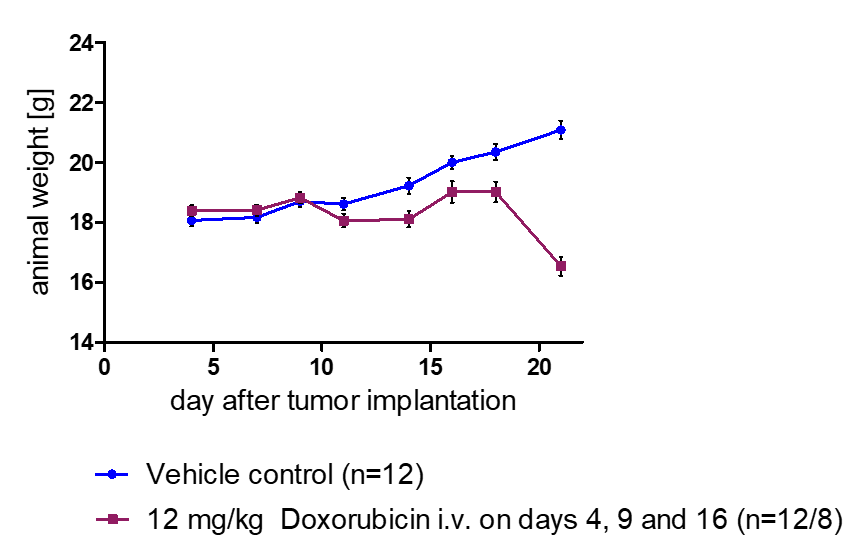 Animal weights for the 4T1-Luc_M3 metastasis model are shown with vehicle and drug treatment after primary tumor implantation. 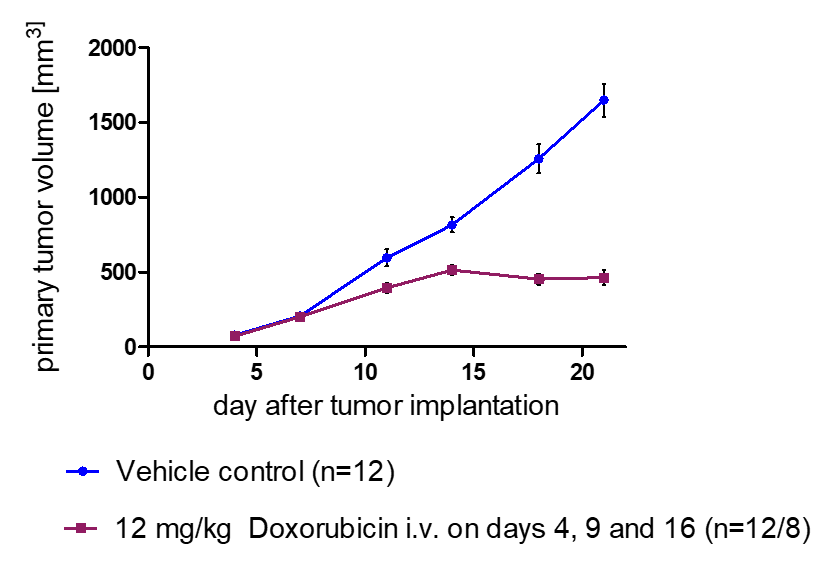 Monitoring of primary 4T1-Luc-M3 tumor growth was performed twice per week via caliper measurement. Shown are the mean values +/- SEM. The vehicle control group comprised 12 mice during the entire study duration. 4 mice of the treatment group died before the termination date on day 22. 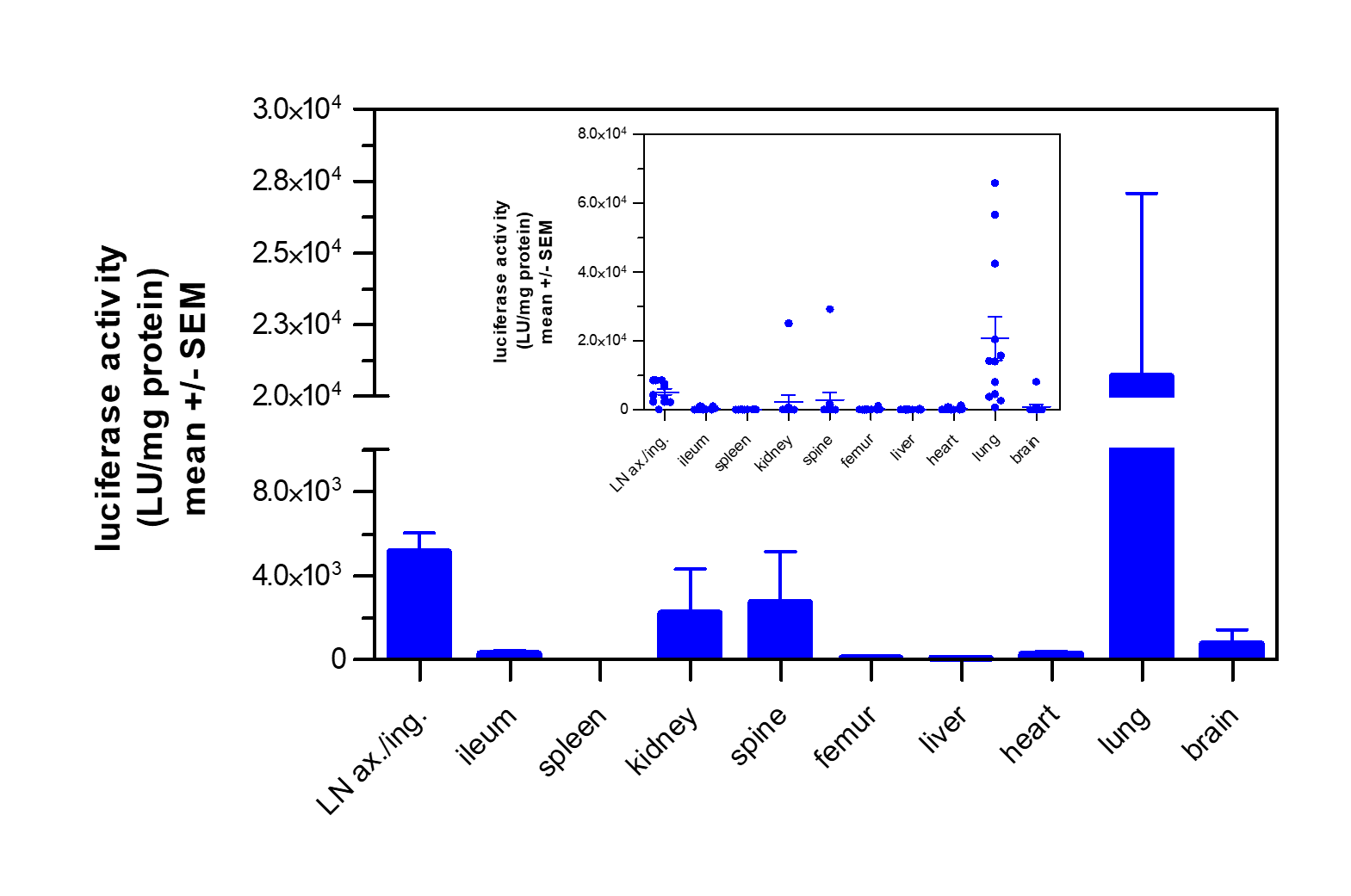 On day 21 after primary tumor implantation, both the vehicle control and the drug treatment groups were euthanized. A selection of organs was isolated from the animals of the vehicle group and metastasis burdon was quantified via ex vivo enzymatic luciferase quantification. The insert shows the values for each mouse, the bar graph shows the mean +/- SEM for all vehicle control animals.
The lung showed the highest counts of luciferase-expressing metastasis. 11 out of 12 animals had detectable lung metastasis. The lymph nodes of almost all animals also show metastasis.

Cell line: For this study, we have used the breast cancer cell line MDA-MB-231-Luc-Z1 which was transduced for stable expression of firefly luciferase to enable live imaging of tumor cells in the mouse body via bioluminescence measurement.

Study layout: MDA-MB-231 breast tumor cells were implanted via intravenous route into the tail vein and via intracardiac route into the left ventricle of BALB/c nude mice. Metastasis growth was monitored via whole-body bioluminescence imaging once per week, animal weights were taken three times per week and animal behavior was monitored daily. At days 32 and 37, respectively, the mice were euthanized and selected organs were isolated and homogenized before enzymatic quantification of luciferase which serves as a readout for metastasis load.

The proliferation of tumor cells in the mice was determined via whole-body bioluminescence measurement. Data are displayed as mean +/- SEM.

Metastasis load is shown after i.v. (green) and intracardiac (purple) injection for a variety of organs at the endpoint of the study on day 32 and day 37, respectively. The organs were homogenized and subjected to the ex vivo luciferase assay. Shown are individual counts of metastasis load for each mouse and the corresponding mean values. LN ing...inguinal lymph node; LN ax/br ... axillary lymph node.

Result: MDA-MB-231 cells proliferate with similar rates in BALB/c nude mice after implantation into the tail vein or via the heart. Tumor cells implanted into the tail vein are transported to the heart and circulate via the pulmonary artery into the lung capillaries. The high count in the lungs suggests that most cells are filtered in the lungs from the blood circulations. Tumor cells implanted into the left ventricle of the heart leave via the aorta to enter the systemic circulation which shows in a high count of metastasis in the brain and other organs.

Luciferase-expressing tumor cells are implanted into the mice (orthotopic, intravenous, intracardiac, bone-marrow engraftment). When appropriate luciferase signals are detected by whole-body luminescence measurement, animals are randomized in treatment groups before treatment starts. The mice are monitored on a regular basis: metastasis is measured via whole-body luminescence measurement once weekly, animal weights are taken three times per week and animal behavior is observed daily. Once per week, we update the customer with a graphical presentation of the study progress.

A comprehensive report will be prepared by a PhD-level medical writer. The report will be custom-tailored for each project with data that can be used for filing official documents. The report includes material, methods, raw data, animal health chart, and graphs plus statistical evaluation.

Standard Efficacy Studies: The therapeutic effect of a new drug is tested by quantification of metastatic load in the whole body and a selection of organs.

Proof-of-Concept Studies: New drug candidates need to be tested not only for efficacy but also for their mechanism of action in the animal. Exploratory proof of concept studies can be performed together with histological, pathological, or molecular investigations of the biological activity of the drug on the tumor tissue.

Pharmacokinetic Studies: Pharmacokinetic studies on tumor-bearing mice are helpful in determining the concentration of drugs not just in plasma but in the tissue of the tumors.

Survival Studies: A survival study gives data in addition to the reduction of tumor growth – it shows the number of partial and complete responders. The setup is also useful for drugs with no homogeneous response. Studies with an outcome of a mix of non-responders and responders are hard to interpret with common statistical values due to the high standard variation of the results. Survival studies can give meaningful results for such ambivalent drug candidates.

Using the IVIS system, we can detect and track bioluminescent and fluorescent reporters across the blue to near-infrared wavelength region. This state-of-the-art system is equipped with 10 excitation filters for detection of multiple signals in one mouse.

We continuously increase our portfolio of tumor models and provide custom development of new tumor models.

Two-step approach: In case no tumor-model related data are available, we will perform a two-step approach to develop a new tumor model. In the first step, we identify a suitable mouse strain for tumor growth and determine the optimal conditions for tumor cell implantation. In a second study, we will monitor the tumor growth after tumor cell implantation into 12 mice for the determination of the growth characteristics of the tumors. This two-step approach guarantees satisfactory study results for subsequent efficacy studies.

Standard of care (SOC) treatment: Most of our models were tested with a variety of standard of care treatment. Please let us know which positive control is the most suitable for your drug candidate, and we will be happy to provide historical data with SOC treatment options.

The animal facility of Reaction Biology is located in Freiburg, Germany.

Reaction Biology uses laboratory animals to help our customers to understand the fundamental mechanisms behind malignancies and to discover therapeutics to prevent and treat cancer. Data obtained from animal models is critical in predicting the clinical outcome for an oncology drug candidate in development.

Animal welfare is of the utmost importance to us. Animal-based research is highly regulated to ensure ethical and responsible treatment. The mice in our facility are specifically bred for research purposes, and they are cared for to the very high standards.

We are working under GV-SOLAS and ISO9001 regulations in regard to standards of animal welfare and code of practice. 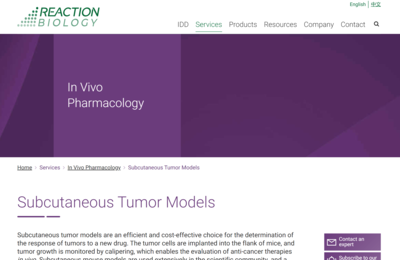 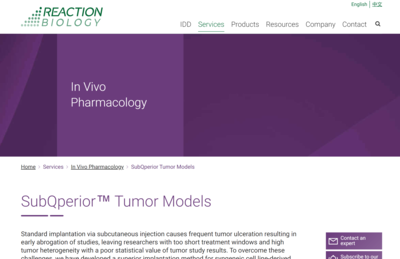 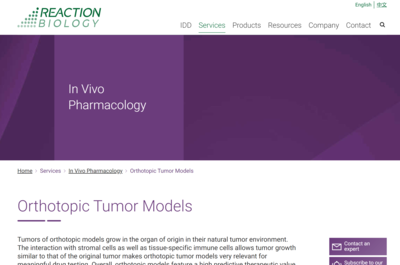 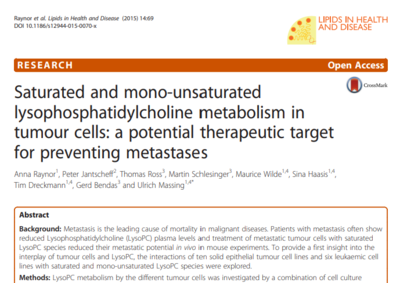 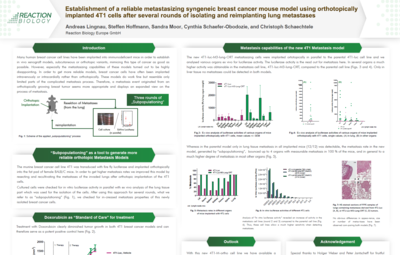