While biochemical assays will likely remain a critical entry point for novel molecules into the kinase inhibitor drug discovery pipeline, the field has collectively achieved a state of maturation that increasingly demands priority for cell-based assays right out of the gate. 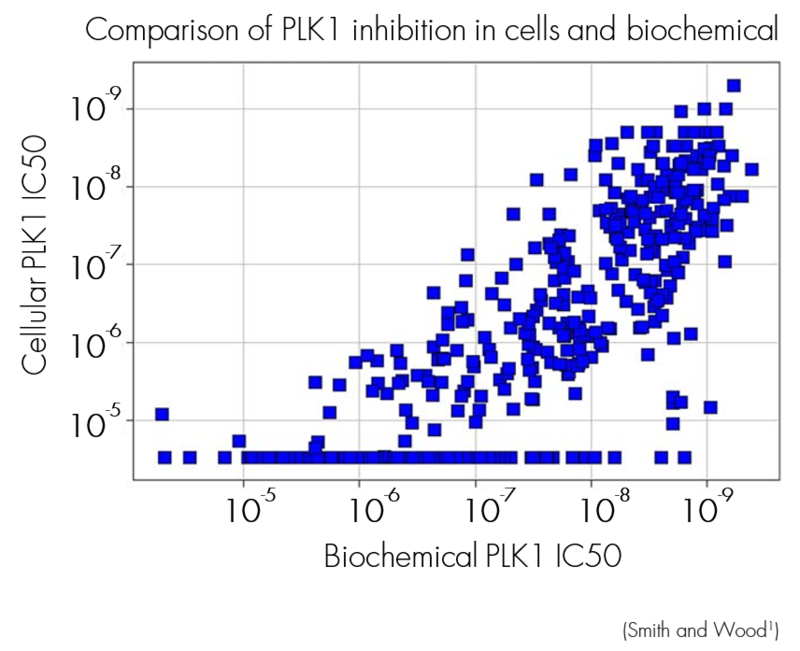 The failure of many compounds proven to be active in a biochemical assay upon later testing in cell-based assays is a disappointing and costly fact of life. The figure above shows the IC50 values for inhibitors of PLK1 (polo-like kinase 1) in cellular vs. biochemical assays. One can clearly see that compounds with a biochemical potency or IC50 value of 10-9 can be either inactive in cells, or have a potency anywhere up its corresponding biochemical values.

Even more costly than failure in cellular assays, however, would be those compounds discarded after failing biochemical assays, which might have worked after all in the cell. There are many examples of compounds with such character, and as many reasons why this is the case. For instance, high-throughput screenings for IGF-1R inhibitors have reported significantly higher cellular potency than that obtained for biochemical assays. In this case, the cellular form of the enzyme was preferentially bound (Wood et al.2)

The true-to-life form of the cellular enzymes can rarely ever be fully captured with biochemical readouts. For example, the dimeric nature of closely related tyrosine kinase receptors means that without the full palette of receptor heterodimers available for the cell to mix and match, optimal activation and kinetics may not be seen in vitro. The time course of receptor responses in a cellular environment will also be affected by competing phosphatases which trim and tune the activation envelope.

In addition to requiring radioactive labels, biochemical assays generally use non-physiologic ATP levels and fail to replicate the other important features of the cellular microenvironment. Local ion concentrations, compartments of ideal pH, availability of cofactors, and presence of membrane barriers are all essential features preserved in cell-based screening assays that should not be skipped during the drug discovery process. Real cells invariably have an abundance of off-targets that can capture the drug to activate alternative signaling pathways, revealing undesirable off-target effects, or a misleading mechanism of action.

A variety of cell-based assays are available for inhibitor testing in intact cells: 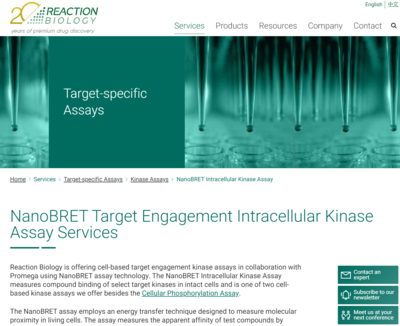 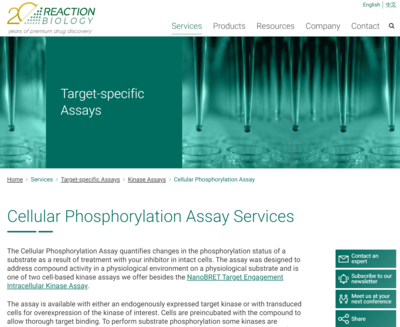